As my personal challenge to walk 1050 miles in 2018 is now complete I’m going to up the ante and aim for 2050 miles! I love walking and pushing myself and having a goal is motivating.

This is an update for the last 3 weeks: 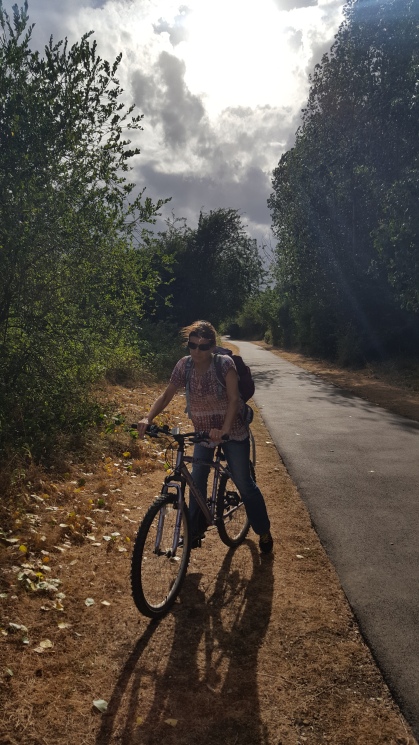 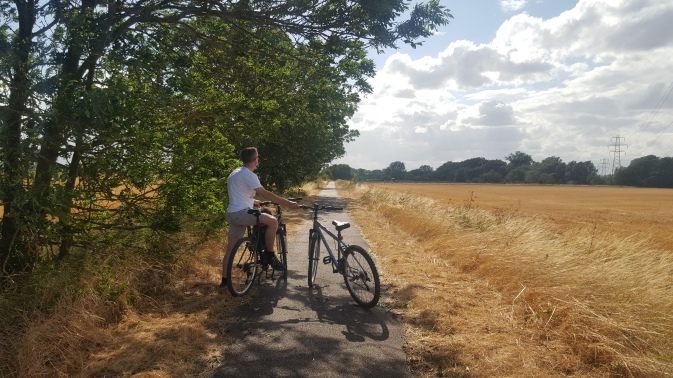 So, my husband Chris and I did do our 24 mile bike ride yesterday! While I am still up for a cycling weekend somewhere, as this is the longest bike ride I’ve ever done I’m going to tick this challenge off as being ‘complete’.

Much of the route was on dedicated cycle paths and bridleways and also fairly flat so the terrain was great for cycling. However as it was really windy we had to peddle hard! We set off in the sun but twice got soaked to the skin in a couple of heavy downpours! The second happened when we were only a couple of miles from home so we arrived back tired, hungry and soaking wet…

Note to self: take a rain coat next time…

We did both feel a sense of achievement and are keen to do more longer weekend cycling and continue our short evening cycle trips during the summer.

Just a short progress update to mention that I’ve completed a session at my work gym every day that I’ve been in the office so far this year. This means getting up at 5:30 am each time I commute into London in order to do my gym session before work. I work in London 2 – 3 days a week so other than when I’ve been away I’ve kept this up and am on track to complete this challenge by the end of 2018!

My hour long gym routine hasn’t changed much as follows:

I usually burn 450 calories each time and this, together with an average of walking another 6 or 7 miles each day and swimming once or twice a week is really helping me to maintain my weight! 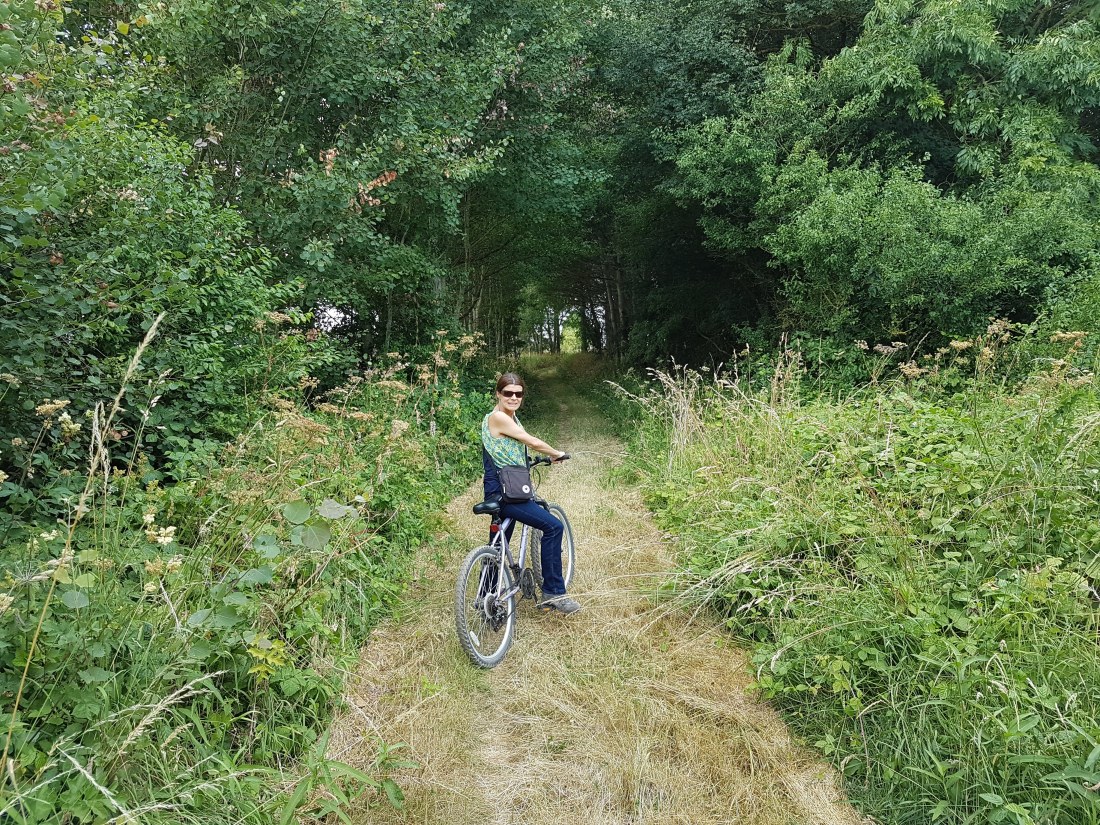 Having done a huge amount of walking and trekking this year I was keen to do some cycling and get some practice for a more lengthy bike ride later on. Chris and I hadn’t ridden our bikes for about 3 years and they sat forlornly outside under a cover slowly rusting away and getting covered in spiders webs!

We recently dusted them down, oiled them up and have spent some of the recent gorgeous summer evenings out and about exploring our local countryside. With our mountain bikes we always stick to tracks and try to avoid roads as much as we can.

We are hoping to go further afield later today with a 24 mile round trip to a larger town! I say ‘hoping’ because we are currently experiencing the first rain in about 3 months on this Saturday morning. In contrast to most years the UK has experienced an ongoing heatwave with many records being broken for example, the hottest London Marathon in April, the hottest May Bank Holiday and one of the driest Junes and July’s, as explained by Wikipedia.

I’m happy to hike in the rain but I don’t fancy riding a bike for a rainy and possibly thundery 24 miles not when more sunny weather is forecast for the next couple of weeks into August!

Book read: Moods of Future Joys: Around the World by bike Part 1 by Alastair Humphreys

Another book about cycling around the world… and I loved it! Another incredible adventure which was well written and so interesting to read. Alastair was only 24 when he decided to leave his home and family in England and cycle through Europe and the Middle East and all the way down the length of Africa to Cape Town. Brilliant!

These are a couple of quotes which really demonstrate Alastair’s ability not only to write beautifully but to fully capture his humble sense of engagement and absorption from his surroundings:

Alastair supports ‘Hope and Homes for Children‘ an organisation set up by a British couple who find homes for children who have been abandoned or orphaned. When Alastair met some of these children in Sudan he said “as I shook their small hands and looked into their shy eyes it was with a feeling of ‘you are amazing’… A beginning with no schooling, home or parents is out of my comprehension and I drew so much strength and resolve from them.”

A few pages later… “Despite their poverty, the Sudanese people I met were happy. They had dignity and self-respect and were content with what little they had. And they had an abundance of friends, family and faith. They were the kindest, most cheerful, hospitable and welcoming people that I had ever met. I pedalled through the village towards Ethiopia with a smile on my face.

Paragraphs such as these are so inspiring and heart warming that I can’t wait to read about the next leg of Alastair’s journey which stretches the full length of the Americas. I love the sense of adventure mixed with dose of motivation each time I read a section.

Following this first book Alastair became an adventurer who writes about his travels, gives lectures and pioneered the concept of microadventures. Alastair’s idea of microadventures are about fitting in a little inexpensive adventure at the weekend to escape your life perhaps by camping under the stars or wild swimming in rivers.

My version of a microadventure has been many mini trips to Europe where, when I’ve been short of time and money, I’ve still travelled and seen the highlights of Paris, Amsterdam, Florence, Berlin and several more cities in a day or short weekend. In fact, I see and appreciate my life as being packed with microadventures… a beautiful 5 mile walk which ends in a country pub during a warm sunny evening after work; a weekend of camping with lovely friends; an afternoon bike ride across bumpy tracks and fields to see my parents… or end in another pub… a trip to the coast or Peak District to do a long walk…

Book read: What Happened That Night by Sheila O’Flanagan

In preparation for my relaxing Cuba beach holiday I purchased a good old paperback which I felt would be far easier to read than reading books from the Kindle app on my iPad! You can leave a book lying around on the sun bed, it doesn’t matter if you get your smeary sun cream fingers on it and the odd splash of pina colada doesn’t hurt…

I managed to read this book within the week I was in Cuba and while I found it quite good and I enjoyed reading it, I could take it or leave it… it wasn’t one of those books that keep you gripped from start to finish…

I did enjoy some of the themes and values which came out strongly from the book… the warmth of the traditional Irish family, the complications of relationships and the idea that following your true feelings is best!

However I’m starting to realise that ‘chick lit’ isn’t really my thing… I’m really keen to read the next instalment from Alastair Humphreys where he cycles from Patagonia at the tip of South America, right up to Alaska in the very north of the Americas land mass. Tales from real life adventures are much more exciting!

I tried wood carving for the first time during last weekend’s camping adventure! As part of a small group my friend Mark used his expertise and showed us how to create wooden masterpieces from small branches! I used a sharp knife and two hours later was the proud owner of my very own hand made spatula:

As I mentioned in my ‘being grateful‘ post I enjoy camping as much as staying in a 4 or 5 star hotel. Sometimes the home comforts and luxuries you experience in a decent hotel are a lovely and welcome treat. However many hotels and especially branded hotels are all the same and… they are all a fairly bland square box of cream and beige! They don’t beat the real sense of adventure you experience in the great outdoors… sitting around the campfire with great friends, chatting, banter, wine and a BBQ…

Chris and I have just spent a brilliant weekend at the edge of the Brecon Beacons on a wild camping bushcraft weekend! Full details will be available on our travel blog in due course…

It is July already and with such a busy 2018 I don’t think I’m going to get to the west coast of Wales this year. I therefore changed this challenge from the Pembrokeshire coast path to the South West coast path.

OK, so I did only a tiny fraction a couple of months ago and had just a taster of this amazing 630 mile walk. I would love to do the entire South West coast path at some point and I’ll try and get to Pembrokeshire next year…

Details of my short experience of a section near Weymouth and Lulworth Cove of the South West coast path can be found on frombluetogreen.com

So… a shared celebration with my best friend! We’ve just returned from a wonderful and relaxing holiday in Cuba to celebrate that we are both 50 this year! My lovely friend Bridget and I have known each other since we met at school when we were about 13 and through the ups and downs of life we have remained good friends ever since!

A full update on our Cuba fun and frolics are available on my travel blog frombluetogreen.com 🙂

The final mile was completed during a fabulously warm 30 degrees summer evening during a short local walk near to my home. As Google Maps (above) shows, this is almost as far as walking from London to Rome!

Here are a few stats:

Keeping a record of all of these extra miles walked has been really motivating and has encouraged me to walk more miles each day and has definitely helped to keep my weight down… I’m planning to continue totting up my daily and weekly mileage and will post updates from time to time… maybe I can reach 2000 miles within these 12 months?