I’ve not walked anywhere exciting this week and did no walking this weekend. The majority of these 48 miles were walked between Mon – Fri and are the result of 5 x gym sessions and 4 x walking to and from train stations with having spent 4 days in the office. The extra gym session took place at Luton Hoo during a spa day (along with 3 outdoor miles!).

I worked in the office in London for just one day during week 46 and these are the days I am able to tot up a few extra miles as it is over 5 miles to walk to and from stations and I do around 5 miles in the gym. When I work at home however I can only manage 3 or 4 miles by walking around my local town (e.g. to our big local supermarket or our local retail park) at lunchtime. So still a lower than average mileage rate for this week. Thankfully this was topped up by 10.5 miles today during another lovely autumn walk in Woburn which is not too far from where I live.

Good effort with 3 books read within the last month 🙂

Book read: Step by Step: The Life in my Journeys by Simon Reeve

An awesome book from TV presenter Simon Reeve and possibly my favourite book so far this year. Simon gives an honest account of his incredibly interesting life and he opened my eyes to important global issues.

Simon comes from a modest ‘normal’ background where he grew up in West London with his teacher father, mother and his younger brother. He describes his difficult teenage years where he left school with few qualifications, battled with depression and basically didn’t feel he had much hope in his life.

He got into journalism with a job in the post room and became involved in research. He wrote a book on terrorism before the terrorist attacks of 9-11 after which he became well known as an author, leading to TV appearances and a TV career.

Simon’s first TV travel adventure was called ‘Meet the Stans’ and at the beginning of Chapter 13 he describes the anticlimax felt when he arrived back in London after filming the first half of the series. For me, coming back from any trip and back to the routine of life is always an anticlimax although, as Simon points out, travelling around the world is an “abnormal privilege” and something unthinkable for the vast majority of the world’s population.

Simon describes the issue of migrant workers in Chapter 18, whereby countries such as the UK save money by recruiting Ghanaian health workers which is more than the money they give to Ghana in health aid! This is an issue I’ve never previously considered… how much of this goes on? ‘Rich’ countries making themselves look good with foreign aid donations while simultaneously saving millions with cheap migrant labour!

I resonated with a paragraph at the end of Chapter 19 where Simon suggests we should add meaning and adventure to our trips; for example, by going to strange places, taking chances and embracing risk, rather than “lying horizontal by the pool”. So delving into the culture of a place and not sticking within the confines of the hotel.

Furthermore, Chapter 21 was also close to my heart and values and offers Simon’s take on the environmental consequences of travel. He advises we seek out authentic travel experiences and understand that when we pay our national park entrance fees, we are helping to preserve  “the greatest wildlife on the planet”.

All in all, a brilliant and highly recommended book!

Book read: It’s on the Meter: One taxi, Three Mates and 43,000 Miles of Misadventure Around the World by Paul Archer and Johno Ellison

This was another inspiring travel and adventure book! This is about 3 lads who, after a drunken evening, agreed to buy a London taxi and embark on ‘the longest taxi journey in the world…’

A short while later they were en-route from London to Sydney… the beginning, the Europe section was ‘laddish’ with tales of getting drunk almost every evening with their couch surfing hosts. I had no problem with this given they were all in their 20’s and it was fun to read of their antics.

The book got more interesting as they ventured towards Central Asia and described the issues they faced with their journey across borders into countries such as Iran and Pakistan. And their drive across the highest point in the world, Everest Basecamp!

Their adventure was event featured in the Daily Mail!

Another exciting ‘hard to put down’ book!

I picked up this book in Varadero airport at the end of my trip to Cuba where, throughout a week of seeing his iconic image at almost every turn, I was intrigued to learn more about Che Guevara and the Cuban Revolution.

Of over 20 books I’ve now read so far this year, this is only the third paperback with the rest being Kindle books as downloaded to my iPad. However with a recent holiday to Grenada I had saved this book until then.

Learning about history has interested me much more as I’ve got older; having seen places around the world I can now relate to them in a way that they seem much more real than ever being taught from a text book at school. To be honest, I was never keen on history lessons back then.

This book was written by Aleida March who was Che’s wife and the mother of 4 of his 5 children. Argentinian Che met Cuban born Aleida when they were both guerrillas in the Cuban Revolutionary army. The book describes her early life and her life with Che until the point he was assassinated in Bolivia in 1967.

This is an incredible story of her militant life back in the day when many women were housewives. The book was difficult to follow at times but gave a fascinating account of  Cuban history and a side of Che Guevara that would previously have been unknown.

Another below average mileage week as I was still in Grenada from Mon – Wed where I walked no more than a couple of miles a day. However I’ve just spent a weekend where I hiked around 16 miles up and down several peaks in the Peak District (Derbyshire) which has pushed up this weeks’ total a bit!

As I was on holiday for 1st November I’ve included pre and post holiday weights.

Oh dear… a week of all inclusive indulgence resulted in a weight gain of 7 lb! I must say I was a bit reluctant to get on the scales this morning, the first full day back from the holiday 😦

In the past I wouldn’t have faced up to the weight gain and would have ignored the fact my clothes felt a bit tighter… this is how my weight got to 10 st 7 lb by this time last year. However being honest with myself and acknowledging this weight gain has inspired me to get rid of the extra pounds quickly so today I’ll resume calorie counting and up the exercise for the next week or two and see what happens…

Above is a ‘Nutty Russian’ an example of one of the delicious cocktails available. It contains generous measures of:

This was totally unplanned at the beginning of 2018 when I made the original list of 50 challenges and I had no idea we would take such a trip this year. However for our 8th wedding anniversary Chris booked a lovely holiday to the Caribbean island of Grenada where we were very lucky to stay in Sandals which was quite a treat and at the other end of the accommodation scale from our two camping experiences this year, one being in Wales and the other in the Peak District! 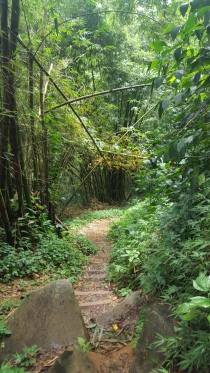 Less than what has lately become an average of around 50 miles walked each week.  This is because I spent most of week 44 on a relaxing holiday in Grenada where the only walking I did was around the resort hotel! With the exception of a short trek of the ‘Seven Sisters Waterfall’. The falls took around 20 minutes to reach although this was quite challenging being steep and muddy! And as we were not planning on any trekking I did this in sandals rather than walking boots!

This weeks figure is only boosted to 29 as I did 11 miles (walking and gym) on the Monday of this week, before I went on holiday.